By Lorraine March 29, 2018
Today, we're going to discuss the secret to getting business at conferences, expos, meet-and-greets, any place where you are at forums where you get a chance to interact with representatives from corporations for some of the largest companies.

How many of you can identify with going to these events, walking up and down the hallways in these big convention centers, being excited about being able to get your product out there and let folks know about your wares? And you end up leaving and reflecting back on the day and saying, "Well, I got the website from 20 other companies, and I can fill out the supplier database, put my information in their supplier database, and when there's an opportunity, they'll reach out to me because I made such a connection with them."

Or they took your business card and said, "We'll have somebody follow up with you." Or you got the business card of everybody at the booth saying, "Hey, I just need to follow up and my opportunity is going happen."

In none of those situations, did you actually walk away with business. The odds of you getting business based on those interactions isn't that high. There's a lot of persistence that has to happen. That's the way that a lot of us got into business.  We pushed hard enough until we got that one opportunity.

One of the big things that we typically do when we go to these events is, we want to talk about us. We have to change that. Someone looks at us and says, "Hey, what do you do?" Let's use janitorial for an example. We'll say, "Hey, I own a janitorial company." So he says, "Well, how long have you been in business?" And you say, "My company is ACME Dobbins Janitorial. We've been in business for about five to seven years. We've got about 15 or 20 employees. We have this book of business, and we've been doing well."

Somebody says, "Tell me a little bit about what you do." You say, "We're ACME Janitorial, and we've been in business for about five to seven years, where we've consistently lowered the cost of people's janitorial requirements by 15 to 20 percent, because we have an innovative, unique operation that uses a combination of electronic cleaning items and robots and a well trained staff that allows us to get in and out of our clients' premises in an hour or two. It is more effective, deeper cleaning, and because of that, our surfaces tend to stay cleaner longer, so that we don't have to come in as frequently."

Somebody says, "Oh! You're not in my building that long, I'm minimizing my security risk, I've got environmentally sensitive cleaning products that you're using, and you're probably going to get cleaner surfaces that will last longer so that you don't have to come as frequently. I need to know more about how you do that. Tell you what, call me, and I want you to get on my calendar for eight o'clock tomorrow morning, and if you don't get me, hit zero, pound, ask my assistant. I'm going to let her know to expect a call from you, and I want to talk with you first thing in the morning."

Now you're on to something. What you always want, when you leave one of these events, is for somebody to say, "Tell me more." That's when you know you've achieved the objective. You made a connection. You created your own opportunity.

For over 10 years Randall Dobbins, our President and Founder, has been instructing Disadvantaged Business Enterprises (DBEs) from around the world on what it really takes to be successful in contracting with the largest companies in the world. Not only teaching them what it takes to get contracts but what it really takes to compete at the highest levels. Thereby allowing this group of suppliers to enjoy the business success they hoped. He, too, is a business owner.
https://www.dobbinsinternational.com/meet-us.html 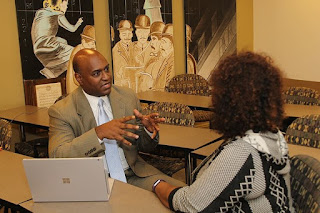 Brandon Stevan said…
Yes of course! For a successful business, it is very important to interact with representatives from corporations for some of the largest companies. These are the important aspects to be noted but most of the businesses forget to include these points. I have got business useful business solutions from synergy 360 which is a popular Business Consulting Solutions provider in Australia.
October 17, 2018 at 3:03 AM

Gasper Guarrasi said…
Interesting post and informative content. Thanks for sharing the business information. For More Information you can visit Gasper Guarrasi Website.
November 26, 2018 at 4:07 AM

Dennis Omanoff said…
Interactions are one of the major factors that every business should have. But this is found to be missing in most of the businesses. Due to which business lack behind.
I usually get business-related news from https://www.stage32.com/media/2122878103029033900
April 18, 2019 at 1:28 AM

Technical Assistance said…
Thanks for Sharing this valuable post
Digital Marketing Course in Delhi
Coupondunia
October 1, 2019 at 4:30 AM

cloudstoryin said…
I really love your website.. Very nice colors & theme. Did you develop this web site yourself? Please reply back as I’m looking to create my very own blog and would love to learn where you got this from or just what the theme is named. Thanks!

aaronnssd said…
I liked your work and, as a result, the manner you presented this content about AWS Competitors and Alternatives.It is a valuable paper for us. Thank you for sharing this blog with us.
September 15, 2021 at 11:29 AM

Pawprint Reminders said…
You have given great content here. I am glad to discover this post as I found lots of valuable data in your article. Thanks for sharing an article like this.Business Cards For Veterinarians
March 28, 2022 at 5:08 PM

By Lorraine January 14, 2018
A question that comes up frequently is, “What's the difference between diversity versus minority owned business?”    In the United States, minorities are African-American or Blacks, Mexican-Americans, Indian-Americans, Asian-Americans, Native Americans. In other countries, such as South Africa, it means something slightly different. In Australia, New Zealand, it means something different. In Canada, it means something different.  In general, minorities, as a group, are country-specific and are considered to be underserved when compared to the majority.   Originally women were lumped in with this group, which confused many people. They were eventually classified as a specific group so people understood women were a minority group. To avoid confusion, we identified women as Women Business Enterprises to distinguish this group from Minority Business Enterprises. You've probably heard of acronyms such as MBE/WBE or M/WBE to indicate these two distinct groups. As
2 comments
Read more

By Lorraine January 07, 2018
My entire professional career was based around designing, negotiating, implementing and managing strategic alliances. I did this from all three sides of the table:  as buyer, seller and minority business owner.   I started my career doing research for Shell Oil Company and eventually moved up to supply chain management work. Here I negotiated strategic alliances with some of the largest suppliers in the world.  You see, in the world of corporate, strategic alliances are tightly integrated relationships where resources are invested by both companies . The partnership allows for both businesses to prosper - clearly, a key component of the revenue driver, cost drivers or profitability.      In 2004, I decided to leave my corporate career and start my own company. I decided I was going to approach a friend of mine, who happened to be a supplier diversity manager, about doing a contract with her company (mind you, t his company is and was one of the top five largest oil and
8 comments
Read more